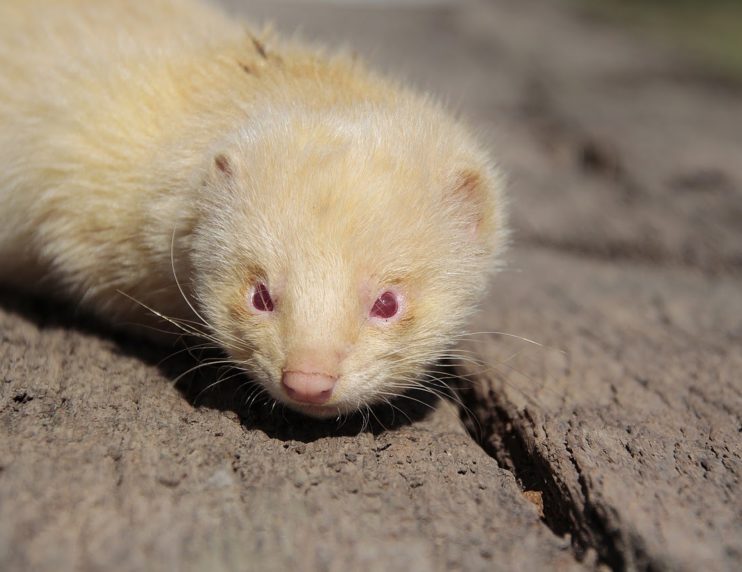 Ferrets are a remarkably diverse species. One of the key traits that distinguish weasels from one another is the undercoat color, which is entirely white for one variant. These are known as “albino ferrets,” wonder in the animal kingdom due to ferrets’ unique genetic mutation. Read on to learn more about these striking animals and if you’re looking to consider having pet ferrets soon!

What is an Albino Ferret?

An albino ferret is a normal ferret born with a sort of physical mutation that prevents its body from producing color pigments in the skin and eyes (mostly).

Albino ferrets inherit their physical appearance from their parents, both of which must carry the recessive genes related to albinism for the condition to arise. Further, both parents must pass this recessive gene onto their offspring for albinism to occur. Having two-parent carriers doesn’t guarantee that the baby ferret will be born albino.

This leads to the question, “Are albino ferrets rare?” When it comes to human-controlled breeding, no. These types of ferrets are very common and bred around the world.

Natural occurrences of ferret albinism tell a different story, though. Scientific estimates of the frequency of albinism change significantly depending on the breeding species. Some researchers guess that a single albino ferret is born per 10,000 normally pigmented ferrets, for ferret mammals specifically.

However, as the studies home in on specific species, like ferrets, the number swells up to one million, discussed later.

The parts of the body affected by albinism in domestic ferrets include:

Besides the basic species differences, there are no substantial distinctions between albino domestic ferrets and “wild ferrets.” (There is no such thing as a “wild ferret.” Instead, there are black-footed ferrets or European or Siberian polecats; not ferrets, as most people know them).

Albinism is a genetic disorder that can affect all ferrets similarly, manifesting any of the medical problems discussed thus far. These issues can arise regardless of if the animal lives in a cozy home or out in the forests of western Eurasia.

However, there are certain dangers the wild that an albino ferret has to face that their domestic counterparts do not:

Because of all these risks, you’re more likely to see white ferrets or albino ferrets in domestic settings than you are to encounter black-footed ferrets or polecats with albinism in the wild. The difference in prevalence is also due to this animal’s historical role in hunting.

White ferrets are significantly easier for their human hunting partners to spot, so white coat colors and albinism tend to be kept in genetic lines more than they would in wild populations.

Like all albino animals, ferrets are likely to have a hard time when it comes to their physical health.

If you have an albino ferret or are planning on adopting one, it is best to learn about all the potential health risks beforehand, so you know what you’re getting into. Here’s a closer look at which sensitivities and diseases to prepare for in life with an albino ferret.

Do Albino Ferrets Have Health Problems?

The most important health problems you’ll need to watch out for in your albino ferret concern the eyes and skin.

As mentioned previously, these particular areas of the body are especially vulnerable to environmental pressures and elements. These sensitivities are due to the lack of melanin required to absorb the external world’s harmful effects (e.g., excessive UV exposure).

With this in mind, you’ll need to watch for the following health problems that are especially prevalent in albino ferrets:

It may seem that albinism affects a ferret’s outward characteristics more than anything else to the average person. Yet, this mutation can give rise to specific medical conditions that can worsen your ferret’s visual capabilities.

For example, optokinetic deficits can show up in ferret kits as soon as three days after opening their eyes for the first time. (This age group is of particular concern, but this problem has ways to arise during any developmental stage as they are sensitive to lighting.) Disorders like this are why so many people wonder, “Are albino ferrets blind?” The answer is mostly no.

Optokinetic deficits are essentially the ferret’s inability to control their eye movements normally. This disorder is more apparent when they’re trying to watch a moving object. Their eyes’ natural responsiveness (scientifically known as the “optokinetic reaction”) is noticeably slow.

Still, albino ferrets can retain some parts of the same visual capabilities as other ferrets. They’re not entirely motioning blind. Instead, they have a tougher time noticing objects moving around them in an “incoherent” pattern.

This essentially means that an albino ferret would struggle to visually track several things moving at once, each in different directions. Multiple things moving “cohesively” in a single direction or pattern, though, is easy to interpret.

How Long Do Albino Ferrets Live?

Just like any other ferret, albino ferrets can live around eight years, give or take a few years. So far, scientific knowledge on humans with albinism has shown that the condition does not typically impact lifespan.

People might apply the same logic to ferrets to an extent, as partial or full hypopigmentation works by the same mechanisms in most organisms. This logic is supported further by the fact that both ferrets and humans are mammals, so there are many physiological and medical similarities to draw between the two.

However, animals in different evolutionary groups, like alligators, have been known to live shorter lives because of various complications caused by this congenital anomaly like poor immunity.

Because of the extensive variation between species, it’s impossible to answer whether albino ferrets live shorter lives or not definitively.

What Do Albino Ferrets Eat?

Pet owners can follow the same dietary requirements as those who live with normally pigmented pets. Since they’re not a different species, you don’t have to develop new feeding standards to keep them in optimum health.

In general, you should feed your albino ferret according to the following guidelines:

Maintaining a balanced diet is essential to your ferret’s health, and can help combat any negative effects they may experience due to this congenital defect.

You’ll need to pay very close attention to the health of your ferret’s skin. As mentioned previously, they are far more susceptible to developing skin diseases and sensitivities due to their lack of pigmentation.

Outside of skin protection, your albino ferret will groom itself. People hardly even have to bathe them – in fact, it’s recommended that you consciously avoid bathing them until it’s absolutely necessary.

Excessive bathing can be detrimental to most ferrets’ health. Yet, due to albino ferrets’ skin sensitivity, the effects could be much worse due to the compounding harm of dryness and UV exposure.

You’ll know if you’re bathing your ferret too much if it gets yellow. This indicates that its oil glands have virtually gone into overdrive as a physiological response to the constant agitation from frequent washing. 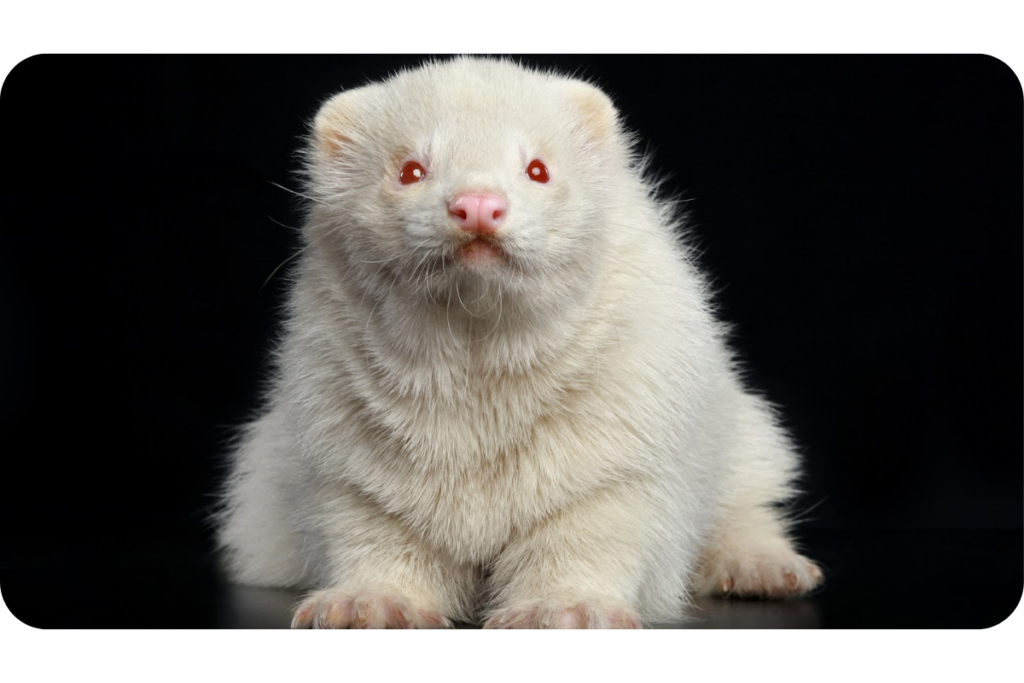 How Much is an Albino Ferret?

Despite all the health concerns that come with this congenital anomaly, many owners still breed these types of ferrets due to the visual appeal of their pink noses and eyes against a pearly white coat. In fact, albinos have risen to be one of the most popular varieties in Australia.

If you’re looking to adopt one of these babies, one of the first questions you might ask is, “How much is a white albino ferret?” 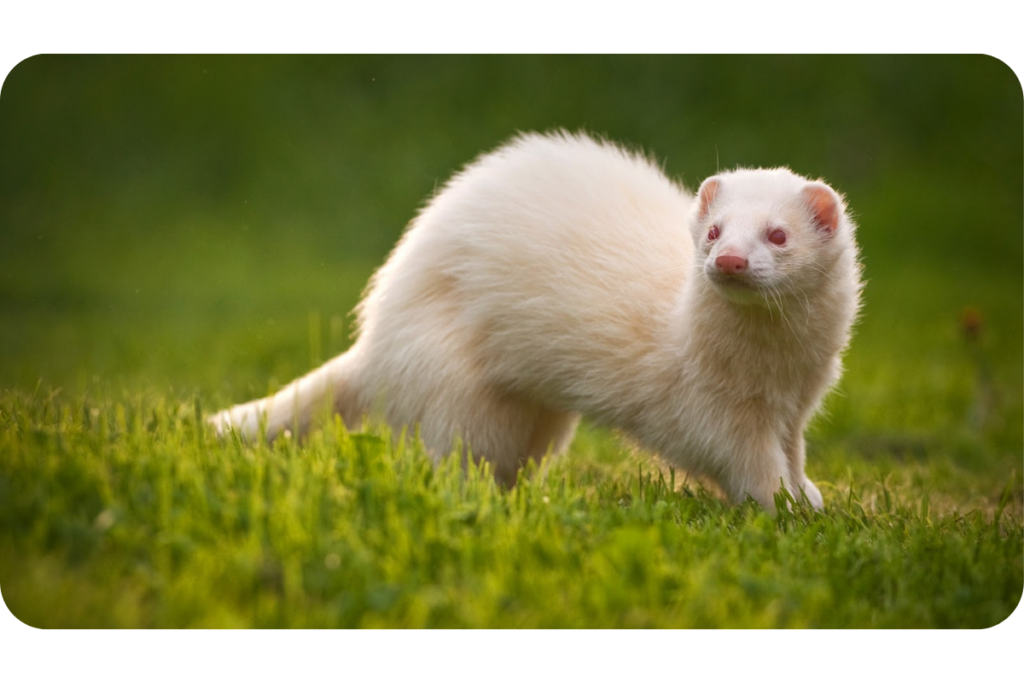 Do Albino Ferrets Live in the Wild?

Albinism can affect any animal, whether they live in the wild or are domestic pets. To be specific, scientists estimate this occurrence only once per 20,000 ferrets at most. Still, the rate can be as low as quite literally one in a million.

Although it is just as uncommon for domestic ferrets to be naturally born with hypopigmentation as it is for their wild counterparts, the possible costs are drastically different, as discussed above.

European and Siberian polecats and black-footed ferrets rely much more heavily on their appearance than domestic ones do. So, although they do occur in the wild, chances are they won’t live for very long.

Without the ability to blend into their natural environment because of their all-white coats, albino black-footed ferrets and polecats have a lot more at stake as hunters go after them. Sadly, it could cost them their lives.

Still, they might get off the hook easily, as partial hypopigmentation occurs more often in wild populations than the full form.

In these cases, the ferrets and polecats may have a better chance of survival, as only part of their body is affected. For instance, the ferret may only have white on the back half of their body but do not have red eyes like those in albino rats, which can harm their sight or even render them blind. Still, this is uncommon, and you’re unlikely to run into any ferrets with either condition any time soon.

Albino ferrets are among the most intriguing animals to grace the earth. Although they are at risk of some health problems, lots of people have found a way to create a comfortable, happy life with their little pearly-white fur-babies.

If you’re looking to bring an albino ferret into your home, refer to this guide to ensure you’re prepared for all the possible issues that may come your way. This foundation of knowledge will help make your and your ferret’s lives much more fulfilling and stress-free.