Can I Make My Ferret Sick? Ferrets and Zoonotic Illnesses 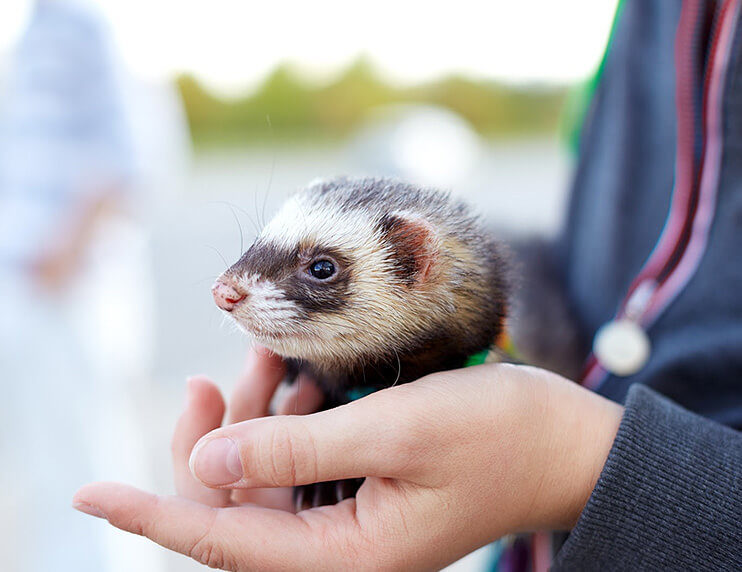 It is common for people to feel like there is a natural barrier between them and sick animals that keeps us all safe. This is because a large number of diseases that cause illness in animals cannot make us sick. And while it is true that there are biological hurdles that block diseases from jumping easily to humans, there is still a range of illnesses that can jump that barrier. These are called zoonotic diseases.

There are many causes of disease, and they can be conveniently divided into categories. Some of these categories are never zoonotic, like nutritional and congenital diseases. But viral, bacterial, fungal, and parasitic diseases all have varieties that can be transmitted to humans. Some of these are not a surprise, such as the parasites known as fleas that literally jump the gap. Others like the fungus that causes ringworm are well known; cats are a frequent source of this infection. Both parasites and infectious fungi go through no adaptation process when transferring to humans, and because this transfer has been happening throughout our evolution, the risks are minimal.

Of much greater concern are diseases caused by bacteria and viruses. When one of these infectious agents enters a body that has no immunity to it, the disease can progress very rapidly and even be fatal. Humans can become very ill from diseases contracted from animals, even when the animal that is carrying the disease appears to be perfectly healthy. This is due to two main reasons. One, the animal’s immune system may have a long history with the disease and be very effective in fighting it. Two, human physiology may provide a better environment for the disease to grow rapidly.

The veterinary specialist Dr. Anna Rovid Spickle has collated a comprehensive list of 237 zoonotic diseases. When correlated with Trenton R. Schoeb’s list, Diseases of Ferrets, and other resources such as those provided by the US Center of Disease Control’s advice on ferrets, there were only 28 zoonotic diseases contracted by ferrets. Ferrets are not always good carriers to pass zoonotic diseases to other species, thus reducing the concern about transfer of disease from ferret to human.

For example, while rabies is known to be transferred to humans through bites (dogs and monkeys are famous for it), ferrets are not a risk for humans. Even though ferrets can contract rabies, they do not appear to be able to transfer the disease. Experiments have revealed that ferrets, which show rabies present in different tissues of their body, do not have it present in their saliva.

Another disease for which ferrets are ineffective carriers is toxoplasmosis. This disease is zoonotic when coming from cats but not contagious from ferrets. The parasite Toxoplasma does not generate infective eggs when hosted by a ferret. Generally, ferrets carry fewer zoonotic diseases than other animals and ferrets are able to transfer even fewer of these to their human owners.

This lack of ferret compatibility with human diseases may come as a surprise because it is widely known that ferrets are the preferred animal for scientific studies of human flu viruses. It would be reasonable to assume that ferrets and humans must share a similar physiology for them both to be able to share the flu virus so easily. But this is not the case. The similarities that enable the sharing of the flu virus are quite specific. The scientific explanation is quite complex, but it is sufficient to know that that the flu virus needs to connect to tissue that matches, similar to the way Lego blocks lock together tightly. Humans and ferrets share an α2,6 receptor binding affinity; the flu virus is able to recognize and bind to this component of its target cells. Metaphorically, this recognition and binding are like the knobs on the Lego blocks sharing the same size and spacing.

It would be reasonable to wonder if this ability to share the flu still makes the ferret a dangerous pet to have around. While the flu is something that is common enough in our societies for us to generally have a good immunity against it, new variations of swine flu and bird flu have proven to spread quickly and cause more fatalities. So why isn’t ferret flu a problem?

To understand this, it is important to recognise the role of immunity in how easily a disease is transmitted and how severely the symptoms are expressed. There is not just one flu, or even just one family of the flu. This virus comes in a variety of shapes that can be grouped into families by their hemagglutinin and neuraminidase or chemical types. This is where the H and N letters come from when we call strains of influenza things like H5N1. Our bodies are very familiar with some of these flu shapes and defend against them easily. Others are not known by our immune system and can be very dangerous. The influenza virus that is uniquely shared between humans, ferrets, and seals is referred to as type B. This version does not change its structure quickly, and our bodies are familiar with it, so it is considered low risk.

The type of influenza responsible for swine flu and all of the other pandemics, including the Spanish flu that killed about 50 million people in 1918, were all type A influenza. This strain changes shape much more quickly, so it is harder to develop immunity against it. It is also present in many wild bird populations, able to transform significantly from what our bodies recognise, and in rare cases jump the barrier to humans in a form that is very contagious.

From Humans to Animals: Anthroponosis

But while you may share the virus and show very similar symptoms, it is important to know that you must never share medication. As stated on petcha.com, “Many contain medications that are extremely toxic to ferrets, such as acetaminophen, a common ingredient in over-the-counter preparations.”

The rules for keeping your ferret safe from you and you safe from zoonotic ferret diseases are the same. Good hygiene, in general, is a must. This includes cleaning up droppings, washing hands, and keeping living areas clean. It is also important to isolate sick people and pets and respond quickly to signs of illness. If you are the only person who can care for your ferrets and either you or they are sick, wear a mask and sanitize your hands before and after handling them.