Genetic Variation in Ferrets: Inbreeding and the Ferret Gene Pool 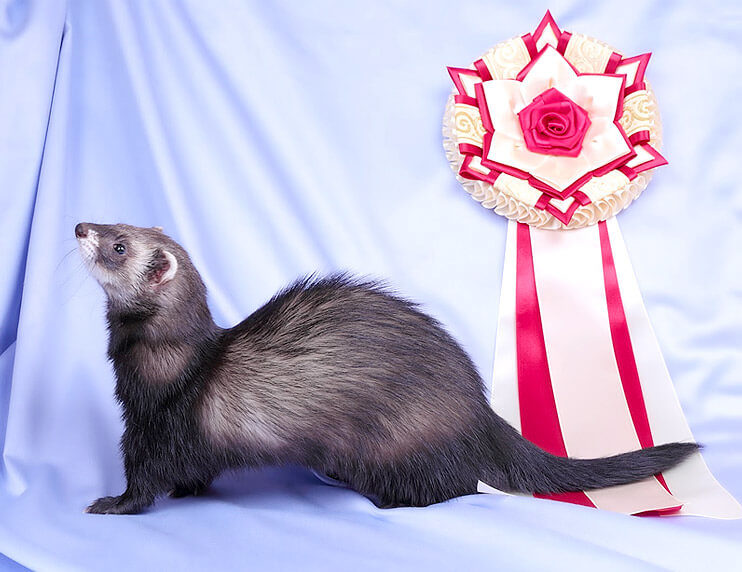 The ferret emerged from the domestication of the polecat, an animal found in a broad swath of land stretching from Eastern Europe to Western England. This domestication must have happened at least 2000 years ago, as the earliest mention of the ferret is in the pre-Christian era. Until the last couple of centuries, the animal was contained in the same habitat as its feral ancestor. However, with the advent of colonisation, ferrets were increasingly introduced on other continents where they sometimes had a detrimental effect on the native fauna.

For years, people have had concerns about the genetic health of domestic ferrets. People have wondered, for example, if the gene pool does not contain enough variation to support a healthy population over a long period of time. This concern is certainly not unique to ferrets. Among humans, inbreeding within an isolated population can concentrate the appearance of traits that are limiting or detrimental. A dramatic example of this is the remote Pacific island of Pingelap in Micronesia where 1 in 12 individuals of the population is color blind.

Ferrets, the Founder Effect, and Genetic Drift
Genetic Variation and DNA Fingerprinting
“The Polecat is My Cousin!” or Fingerprinting the Ferret
The Future of Ferret Breeding

Why does population size matter so much? To understand this phenomenon, we need to understand the role of unhealthy genetic variants. Each ferret kit inherits two copies of most genes, one from his mother and one from his father. When a gene has more than one version in the population, we call the different variants alleles. For some genes, there are dominant and recessive alleles. A dominant allele will encode a protein product, whether a ferret has one copy or two copies. Recessive alleles vary in whether or not they encode a protein product, and often recessive alleles can cause a deleterious effect on the animal’s health. But the animal will only experience this deleterious effect if he has two copies of a recessive allele.

Adding new members to a population can help to offset the founder effect. Crossbreeding is carried out on a regular basis in dogs, cats and farm animals. For the ferret, however, the only chance of introducing new genes is by introgression–that is, mating with wild polecats, weasels or mink. Introgression is most feasible in Europe where all of these species are locally available.

In order to get a clear picture of the genetic variation in ferrets, Gustafson et al. from the University of Wyoming at Laramie in the United States screened ferret populations from different parts of the world for their genetic traits. DNA was extracted from the saliva or tail hairs of 765 domesticated ferrets from Europe (Norway, Sweden, Netherlands, Hungary, England, and Scotland), Australia, New Zealand, United States, and Canada. The “DNA fingerprints” obtained from these samples were compared with those of wild polecats, mink, and weasels.

DNA fingerprinting is a technique used to determine the genetic variation within a species. Just as we all have unique patterns on the skin of our fingertips, our genetic material (DNA) can form unique patterns when the DNA is cut into fragments by specific enzymes and separated by length. Where the enzymes make cuts in DNA can vary from person to person or ferret to ferret based on differences in the DNA sequence. The more closely related two individuals are, the more similar their DNA fingerprints will be. A child, for example, will have a DNA fingerprint that is a hybrid of the patterns seen in the DNA fingerprints of her mother and father. Identical twins will have a single DNA fingerprint because they are genetically identical. Extrapolating this idea to a larger family of individuals, it becomes possible to demonstrate that genetic variation within a species can also be determined from DNA fingerprinting. For ferrets, the probability of variation is higher in populations when there is more introgression. In contrast, a highly inbred population will show very little variation.

“This Polecat is My Cousin!” or Fingerprinting the Ferret

Gustafson and colleagues used extensive statistical analysis to collate the data from the large sample set of ferrets and their putative feral mates. At least four distinct clusters of ferrets could be identified: the UK cluster, European cluster, the Australian cluster, and the North American cluster. The infusion of new alleles in the gene pool as determined by the appearance of new allelic variants was the lowest among Australian ferrets and highest among European ferrets.

Interestingly, the authors discovered a number of genetic relationships between domestic ferret populations and wild polecats. The greatest genetic variation was seen in the Hungarian ferrets followed by Danish ferrets. Perhaps this is not surprising, as Hungary has at least two species of wild polecats. The new alleles associated with the Danish ferrets corresponded to those of mink. The UK ferrets showed the least variation from the wild polecat. The low variation within the cluster has been attributed to the decline in the polecat population in the late 19th century, which created a stagnation of the genetic diversity. The North American and Australian ferrets are the most highly diverged from the European polecat, an observation that is consistent with geographical isolation from wild polecats. The individual populations also showed the lowest genetic diversities. The New Zealand ferret is related to the UK cluster, which is historically consistent with the fact that these animals were imported from Britain in the late 1800s and released in order to contain the rabbit population.

The Future of Ferret Breeding

Gustafson et al. put the problems of low genetic diversity in the correct perspective of the health of ferrets. We know that breeding for certain coat colors or patterns, for example, is correlated with Waardenburg Syndrome, a condition which in ferrets is associated with deafness. Continuing to breed for certain coat colors may result in selecting animals with a high propensity to develop gastrointestinal problems, cancer, and/or reduced immune system function. Instead, active crossbreeding with other populations or wild polecats could be beneficial. Crossbreeding between ferrets and polecats remains a controversial practice among ferret breeders, some of whom have observed that ferret-polecat hybrid animals can be more similar behaviorally to their wild polecat parent, which makes them less desirable as pets. As a long-term practice, however, the pet ferret gene pool may benefit immensely by careful interbreeding between ferret-polecat hybrids and regular ferrets. The work of Gustafson et al. is important for the ferret community because it puts the genetic diversity of different ferret populations into a context that will likely be useful for future breeding decisions.

Buller, C.M.G. “On the Proposed Introduction of the Polecat into New Zealand.” Transactions and Proceedings of the Royal Society of New

Sacks, Oliver. The Island of the Colourblind and Cycad Island. Published by Picador Pan Macmillan Limited in 1996. (Book)