How Often Should You Replace a SuprelorinⓇ F (Deslorelin Acetate) Implant? 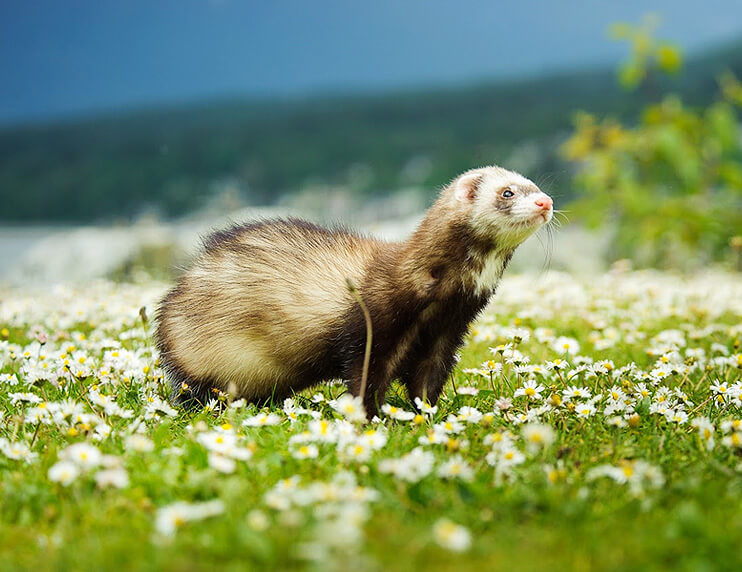 Virbac Animal Health makes the SuprelorinⓇ F implant used all over the world to manage adrenal disease in ferrets. The implant contains 4.7 milligrams of deslorelin acetate, a GnRH analog that is slowly released and interrupts the reproductive endocrine system. The implant is also used to desex ferrets, in place of neutering or spaying (see the further reading section at the end of this article). This helps with the following adrenal disease symptoms:

The implant doesn’t cure adrenal disease and has not been shown to shrink adrenal tumors. However, it can slow down tumor growth by inhibiting production of sex hormones, something surgery can’t do. And by removing symptoms noninvasively, the implant allows the ferret to have a happy, mostly healthy life until the tumor becomes too large to treat.

Depending on where you live, you may receive different recommendations from your vet on how often this implant needs to be replaced for the management of adrenal disease. The manufacturer’s instructions indicate that it should be replaced every 12 months, but your own vet may recommend replacing it every 14, 18, or even 24 months. Why?

To help you understand your vet’s recommendation and make an informed decision about your own ferret’s implant, we’re going to look at what the studies say about the implant and how long it’s effective. So far, three controlled studies have been published on the SuprelorinⓇ F implant:

Published in American Journal of Veterinary Research in May 2005Principle researcher: Robert Wagner

Procedure: 15 pet ferrets with adrenocortical disease were treated with a 3 mg deslorelin acetate implant. Their hormone levels were measured before and after the implant and after they regained symptoms. When their symptoms returned, their adrenal glands were measured via ultrasound or after surgical removal.

Results: Swelling of the vulva, severe itching, sexual behavior, and aggression were “significantly decreased or eliminated” 14 days after implantation. Within a month, hair regrowth was noticeable and sex hormone concentrations were decreased.

These clinical signs returned for the 15 ferrets between 8.5 months and 20.5 months after implantation. The average was 13.7 months.

Of the 15 ferrets, 5 developed large tumors within 2 months of the symptoms returning. 3 of those ferrets had to be put to sleep because the cancer spread or the tumor was becoming extremely aggressive.

Published in Journal of Exotic Pet Medicine in 2009Principle researcher: Robert WagnerProcedure: 30 pet ferrets with adrenocortical disease were treated with a 4.7 mg deslorelin acetate implant. They were physically examined and had ultrasounds of the adrenal area every 3-4 months until their symptoms returned.Results: Swelling of the vulva, severe itching, sexual behavior, and aggression “decreased or disappeared” 14 days after implantation. Hair growth was visible 4-6 weeks after implantation. Two months after implantation, sex hormone levels considerably decreased: on average, estradiol by 28%, 17-hydroxyprogesterone by 89%, and androstenedione by 88%.

The clinical signs returned for the 30 ferrets between 8 months and 30 months after implantation. The average was 17.6 months.

Of the 30 ferrets, 2 developed large tumors before symptoms returned.

Published in Journal of Exotic Pet Medicine in 2012

Results: 5.5% of the ferrets that received surgery died within 24 hours of the procedure. None of the ferrets died as a direct result of implantation of deslorelin.

3 ferrets did not respond to the surgical treatment. All of the implant ferrets responded to deslorelin, though it was only effective for one of the ferrets for 3 months.

The average time between treatment and symptom relapse was 13.6 months for surgery and 16.5 months for the implant.

You’ll notice that the first two studies used two different sizes in the implant: 3 mg and 4.7 mg. The 4.7 mg implant did extend the window in which the symptoms returned, so the longest it took for relapse went from 20.5 months to 30 months. But it did not increase the lower threshold. The average went up, but at least one ferret relapsed within 8 months in both studies. In the third study, one of the ferrets only received 3 months of symptom relief.

The average time between treatment and symptom relapse for the 4.7 mg implant is between 16 and 17 months, almost a year and a half. So why does the manufacturer recommend only 12 months? Are they just trying to sell more implants? Well, maybe. They certainly do make more money if the implants are put in prematurely. But all we know is the average, and it is reasonable for the manufacturer to recommend replacing the implant when the implant is still effective for most ferrets, making sure that most ferrets do not relapse between their implants. Also, it could be that the manufacturer’s recommendation is based on the half-life of deslorelin acetate, a more rigorous measurement for medication levels that indicates the amount of time it takes the body to process half of a dose. As of this writing, we here at Dook Dook Ferret Magazine do not know the half-life of deslorelin acetate.

No matter how long you decide to keep the implant in, you should watch your ferret closely after 8 months for a relapse of symptoms. As soon as the symptoms come back, even a little bit and even if it’s before the 12-month mark, you should replace the implant.

You may be concerned that replacing implants will cause a build up in the blood, like over-vaccinating. That is extremely unlikely. Implants are very different than shots; if you receive too many shots of the same medication, that medication may build up to dangerous levels. But an implant is designed to slowly let out medication so that a buildup cannot happen. The only way for your ferret to get too much deslorelin acetate is if you put more than one implant in them at the same time. But your vet will always remove the old implant before putting in a new one. Because the implants release the deslorelin acetate slowly, even if the old implant is still at 100% efficacy when it’s replaced, the ferret will have the same level of the medication in her blood. And an implant is minimally invasive, so it won’t hurt your ferret to get multiple implants throughout her life.

Goericke-Pesch, S., and A. Wehrend. “The Use of a Slow-Release GnRH-agonist Implant in Female Ferrets in Season for Oestrus Suppression.” Schweizer Archiv Für Tierheilkunde, volume 11. Published in November 2012. Pages 487-491. (Scholarly article)