Intelligent Ferrets and Their Need for Stimulation 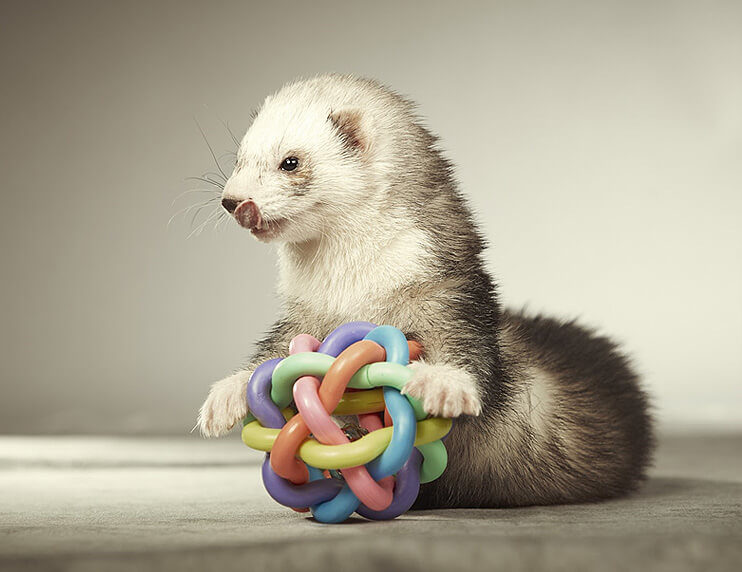 If you ask someone what their basic needs are, they’ll most likely tell you something like food, shelter, sleep, and companionship. But if you then watch what they do, you’ll possibly find them watching something or doing something on the Internet long after they’ve felt the first pangs of hunger, rubbed their tired eyes, and waved goodnight to their companion heading for bed.

Clearly, they are getting something from this activity that is more important to them than food, sleep, or companionship. They’re getting mental stimulation. So you might wonder, is it just people that have this need, or do animals crave intellectual stimulation as well? And if so, how much? It seems fair to assume that there is a direct relationship between intelligence and the need for intelligent stimulation. So when we consider if our ferret is getting enough food for thought, our first question is, “How intelligent is our little friend?”

Intelligence comes in different forms. For a long time, scientific research has focused on logic, pattern recognition, linguistic skills, and other very human and culturally-biased tests. However, in recent decades, a change in attitudes has allowed us to consider things like emotional intelligence, physical intelligence, and other forms of intelligence.

Once, the idea that our bodies are smarter than we are would have been considered preposterous. But a simple test can prove how reasonable the assertion is. Imagine giving someone a diagram of a person with ribbons tied between wrists or ankles, that are threaded through a few hoops that are looped around the person, and asking them to write down the steps required to get untangled. The subject is likely to take a long time, or even fail to figure out how to do it. But take the same subject and rig them up just like in the diagram, and in a few seconds, even without trial and error, they’ll untangle themselves. Ask them how they did it, and they’ll say they didn’t think about it. They just did it. But they didn’t do it intellectually; their body did it. It was an unconscious process that acted without the assistance of logic or all of those other things that intelligence tests focus on.

Emotional intelligence and other socio-psychological tests get similar results, with the same sort of unconscious explanations. Test subjects might say things like “I just felt like she was the honest one” or “he just seemed more caring,” without being able to explain which word or gesture tipped them off to the correct answer. The discoveries in these fields, as well as a shift toward accepting animals as being more intelligent than we previously believed, have led to a more diverse understanding of intelligence. So when considering ferret intelligence, we shouldn’t merely test their ability to solve logic puzzles or use tools, but how physically or emotionally intelligent they are. Focusing on these aspects of intelligence might yield surprising results.

Recent experiments on ferrets have indicated that their 2,000 years of domestication have given them greater socio-cognitive skills than their wild ancestors. One experiment involved both ferrets and Mustela-hybrids that were hand-raised with lots of attention by their owners. Then both sets of animals, about 16 in each group, were tested on eye contact, being guided by gesture, and being guided by touching the desired object. These tests revealed that ferrets were just as adept as dogs in eye contact, and even more than dogs in being guided by gestures or touch. Both ferrets and dogs clearly outperformed the hand-reared Mustela-hybrids.

When it comes to physical intelligence, anyone who has tried to ferret-proof their house will know how smart they are at getting into things they shouldn’t or out of places where they’re meant to stay. But even when it comes to logic puzzles, where humans are meant to excel, ferrets can perform very well. A popular version of these puzzles calls for you to hide a treat so that a series of actions must be performed to get it out. While often designed for other pets, you might find you and your ferret gets plenty of fun out of them.

One of the simplest types of learning is habituation, which is simply getting used to something. Anyone living beneath a flight path will become so used to the planes going overhead that they don’t notice them. Even the biscuit factory down the road will eventually fail to get your attention when they’re baking. You learn that something is not a threat or important by being repeatedly exposed to it.

Associative learning is when some stimulus is associated with a consequence or situation. If your ferret behaves differently when you are about to feed it, then you’ve got a demonstration of associative learning. This typically takes frequent repetition, with the same stimuli always preceding the same situation.

Imitation is a type of learning suited to social animals. Research has shown that imitating an animal’s behavior is likely to make it more interested in interacting with you. Other research has shown that animals are more likely to imitate the leaders of their social group than members that rank lower than themselves. So getting down on your hands and knees to show your ferret how to do something might be the best way to teach a new trick. And just by mimicking what your ferret is doing, you might be able to strengthen your bond.

So is imitation how your ferret is learning to get into and out of things by opening latches? Probably not. Local enhancement learning works by drawing attention to an object or location. So when you touch the latch, your ferret becomes interested in the latch. Then by playing with the latch, the ferret accidentally opens it, and is rewarded. This encourages the ferret to play with the latch again next time, and it eventually learns how it accidentally opened it.

Simply by going through the list of different types of learning, you’ve probably recognized a number of things that your darling has learned to do. Some of them simple, like becoming habituated to things that don’t matter. Some of them inspiring, like being proud of their annoying ability to get in and out of places. Recognizing this intelligence makes it clear how important stimulating your ferret is, and how easy it is for boredom to creep in.

In the wild, the ferret ancestors never get bored, and your ferret will also find natural environments very stimulating. Taking your ferret for a walk will introduce a broad range of new things to stimulate its senses. Remember that new smells and sounds are just as interesting as seeing new things. But it isn’t always convenient to bring your ferret into the wild. Don’t let that stop you from bringing the wild to your ferret. This can come in the form of a box of leaves, an interesting branch, or a tub full of dirt.

Something else from the wild that is missing from a ferret’s environment is prey. As carnivorous animals, ferrets love to hunt and chase. Rolling toys, noisy objects that can be dragged around, even remote control toys can be good as long as you continuously supervise them so they don’t chew it. Prey does not have to be a live animal, just anything that can stimulate the hunting instinct.

And finally, the last part of the natural environment that you can bring inside are tunnels. Ferrets’ love of burrowing does not require mounds of dirt. Instead, you can make entertaining mazes by joining boxes and tubes together. Do this in a safe way using non-toxic materials. But also do it in a way that will enable you to pull it all apart and rearrange the maze, since once they learn it, it may become boring again.

Because ferrets are so intelligent, they’ll quickly learn about their new toy, and after a while, it will no longer be stimulating for them. That doesn’t mean you should throw it away. Just rest it for a while and, if you can, modify it in some way. And be confident that your ferret’s favorite toy is you. By interacting in different ways, especially if you remember the different types of learning, you will continue to keep your ferret stimulated and mentally healthy. And together you’ll have lots of fun.