From Hunter to Companion: The Domestication of the Ferret 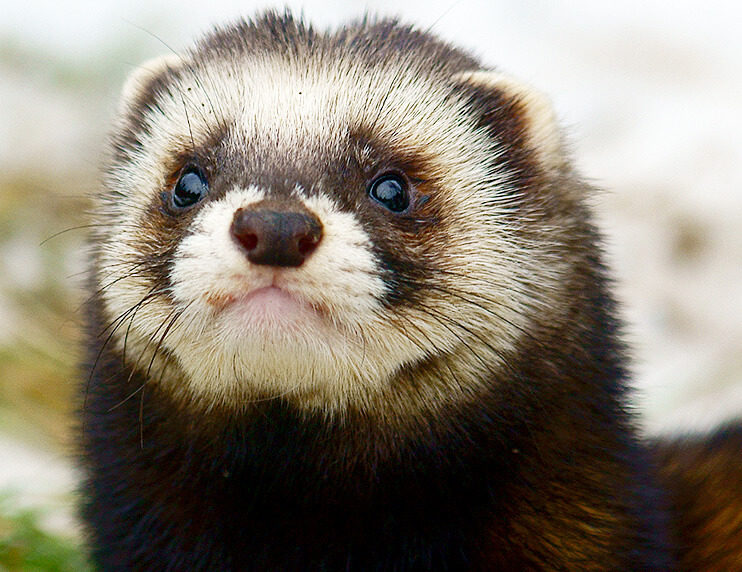 A polecat waits for his dinner at the British Wildlife Centre. Photo by Peter Trimming.

While most people think of domestication as something humans do to animals, in truth many species benefit from domestication. Domesticated species often gain easy access to food, longer lifespans, and increased pregnancy success rates. This is particularly the case with cats; since human colonies involved lots of trash and attracted rats, it was in the cats’ best interest to become more comfortable with humans in order to access the plentiful prey.

Domestication should not be confused with taming; taming simply refers to an animal becoming used to the presence of humans. Domestication involves breeding animals to develop and maintain desirable traits, whether the animal is domesticated for labor (hunting or farming) or food. Typically, we domesticate animals to maintain juvenile characteristics, i.e. a domesticated animal will usually have the behavior and appearance of the wild animal’s young. This is true for ferrets (Mustela furo), who have smaller teeth, shortened muzzles, and more widely spaced eyes than their wild counterpart, the European polecat (Mustela putorius). Ferrets also have the more docile behavior of juveniles, such as less fear of people and unfamiliar environments. 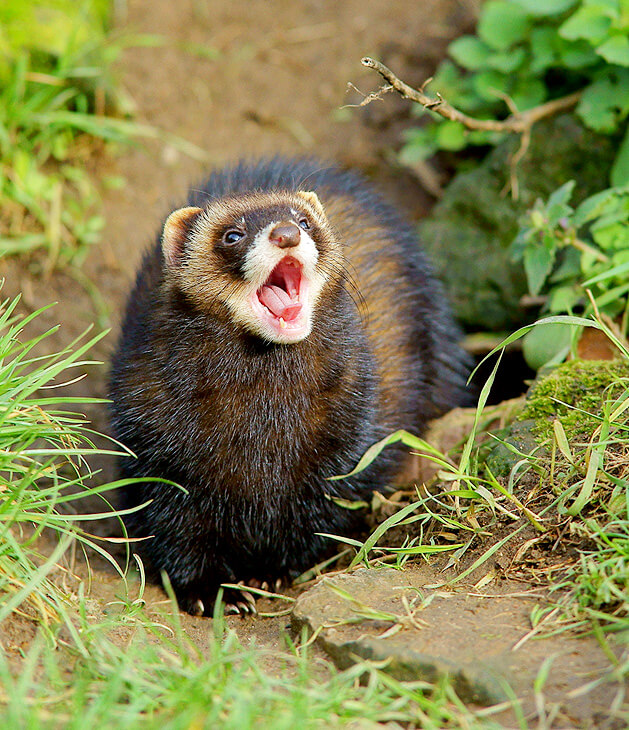 It is unclear why ferrets were domesticated, but it seems likely that ferrets were first used for hunting. Since they were domesticated before cats became popular as ratters, ferrets may have been kept to protect food stores from rats. The first widely-accepted reference to ferrets in writing is from 63 BCE, by a Greek historian named Strabo. He wrote that Libya (a reference to the wider Middle East, excluding Egypt) “also produces ferrets, equal in size to cats, and like them, except that their noses project further.” By 600 CE, ferrets were being used in Spain to hunt rabbits, and in the 1200s, they were in Germany and England. While it is very likely that humans appreciated ferret personalities and antics, they were primarily used as ratters and rabbit hunters until the end of the 20th century. From the mid-19th century, ferrets were also kept for their fur. Thankfully, this practice is no longer very popular, and may become obsolete soon.

Ferrets were not introduced to the Americas until the 1700s, when they were brought over as rat-catchers on ships and by colonists as rabbit hunters. (Only domesticated ferrets were introduced to the Americas. None of their wild counterparts, including the European polecat, were brought over.) They became more popular in the United States in the early 1900s, particularly as ratters.

In the modern age, ferrets have followed the same paths as cats and dogs. As humans became less dependent on hunting for survival and as chemical improvements in rat eradication made ratters unnecessary, domesticated hunters became obsolete. Some were put to other jobs, like service animals or therapy animals, but for the most part, ferrets, cats, and dogs became companion animals. Ferrets were first popular as pets in the 1960s, and now ferrets are overwhelmingly kept solely as pets. However, their history diverged with other popular pets when it was discovered in the 1980s that ferrets serve as particularly excellent models for some biomedical research, particularly the study of human respiratory diseases and influenza. A minority of ferrets in the developed world are now used to help us develop yearly flu vaccines, study cystic fibrosis, and treat asthma. The ferret is so important in understanding human disease that the ferret genome was sequenced In 2014.

Ferrets have been hunters, ratters, research subjects, and pets. They have been human’s best underground friend. We should be grateful for both their companionship and the diverse roles they have played during our development as a society. With such a storied past, it is likely we will continue to develop our relationship with the domesticated ferret. I am excited to see what comes next.