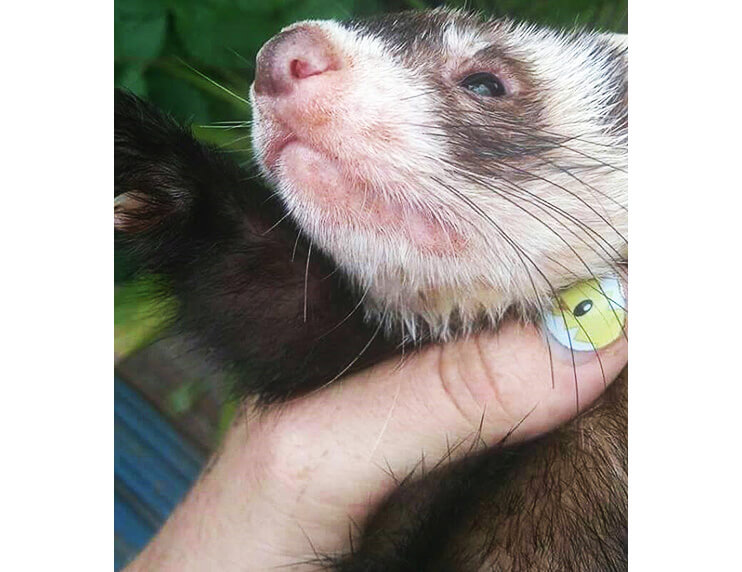 Mention canine distemper to a ferret carer and a cold shiver crawls up their spine. It’s a disease that can rapidly spread and claim the lives of ferrets, putting them through a horrible, miserable ordeal. As I stated in Ferret First Aid and Emergency Care, an ebook (available for free download on Ferret-World.com), canine distemper “can be brought to your ferret on your shoes, hands, and clothes and is extremely contagious. A ferret might experience either a sudden death or in most cases it progresses over 2 weeks.” Signs include a “loss of appetite,” “crustiness/discharge around the eyes,” “rash around the chin and belly,” “soles/pads on feet” thickening, “vomiting, diarrhea, seizures and severe lethargy,” and coma. 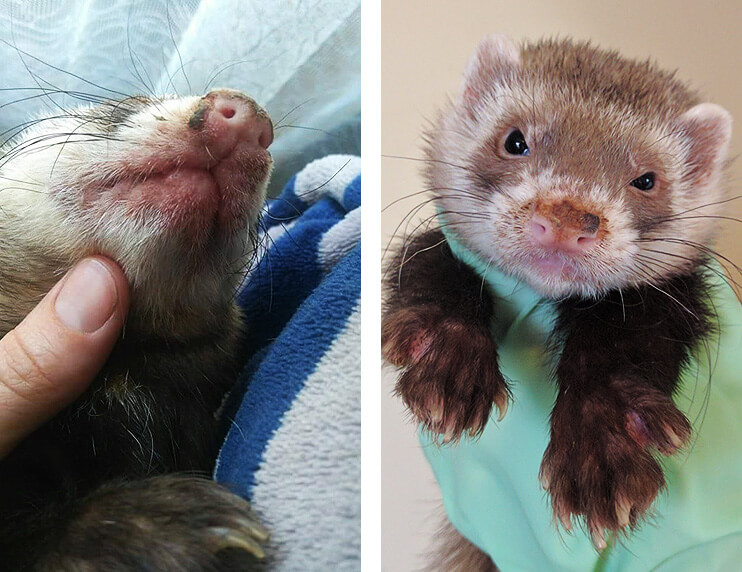 From the same ebook:

“If you have ferrets that live together and one of them starts to show signs of canine distemper then separate them immediately. Take the affected ferret and rush it to the vet, make sure that it does not come in contact with any other animals along the way. Ferrets rarely survive this disease and there are no known cures. If your ferret does catch the disease then most often than not the kindest thing to do is to have them euthanized. Otherwise they will face a slow and very painful death. On a very rare occasion a ferret will survive this disease, and in this instance might suffer forever lasting effects ranging from skin, foot or brain damage. A ferret’s personality will be dramatically altered if it does suffer from brain damage.” 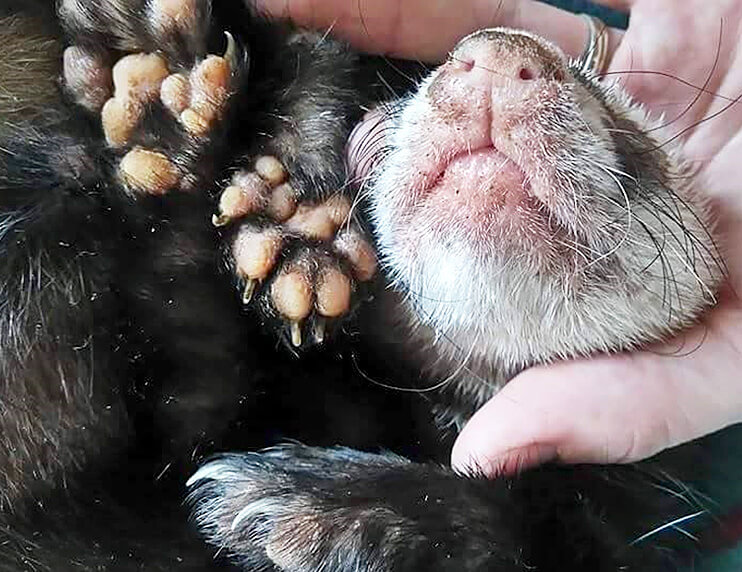 While you can treat canine distemper, like any disease, it’s best to try to prevent it. Vaccines for distemper are not 100% effective, but you should vaccinate your ferret. From Ferret First Aid and Emergency Care, “As a kit, your ferret should receive its first vaccine at 6-8 weeks of age and then a follow-up shot at three months. After that, shots should be administered every year (at their annual check-up). There has been some controversy surrounding this vaccine. There have been cases (in the U.S) of ferrets going into anaphylactic shock after the vaccine was administered. This could be due to the fact that there are two types of canine distemper vaccine, one is appropriate for ferrets, the other is not. Always double check with your vet to make sure they have the right one. If you are purchasing a new ferret be sure to ask if it has had any shots before you get it (get papers to prove shots). Sometimes pet shops will only give the first shot.”

No one wants their ferret to experience the full brunt of canine distemper, let alone a ferret shelter that often houses dozens of ferrets at a time. Recently an outbreak took place at the Unwanted Fuzz Ferret Shelter and below we have a first-hand account of how the shelter owner, Carina Smith, managed to only lose two ferrets during the outbreak, quite an accomplishment considering the disease could have easily wiped out all of the ferrets in her care. Carina was kind enough to speak with me about the outbreak. 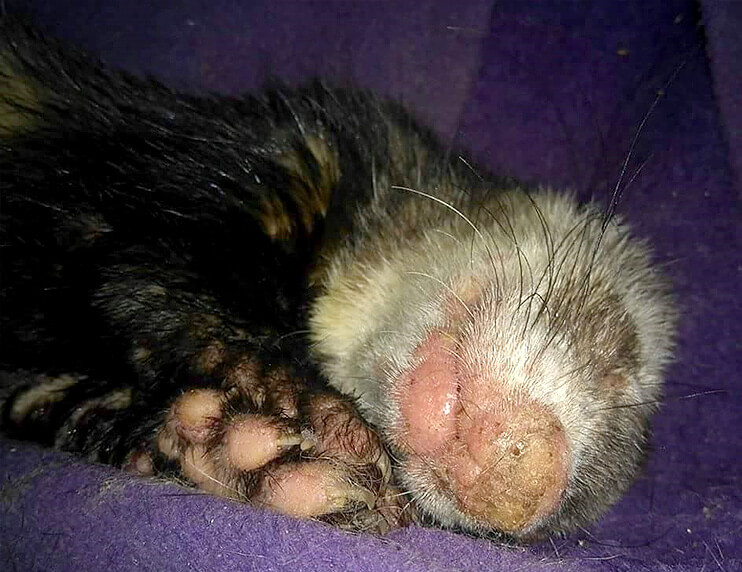 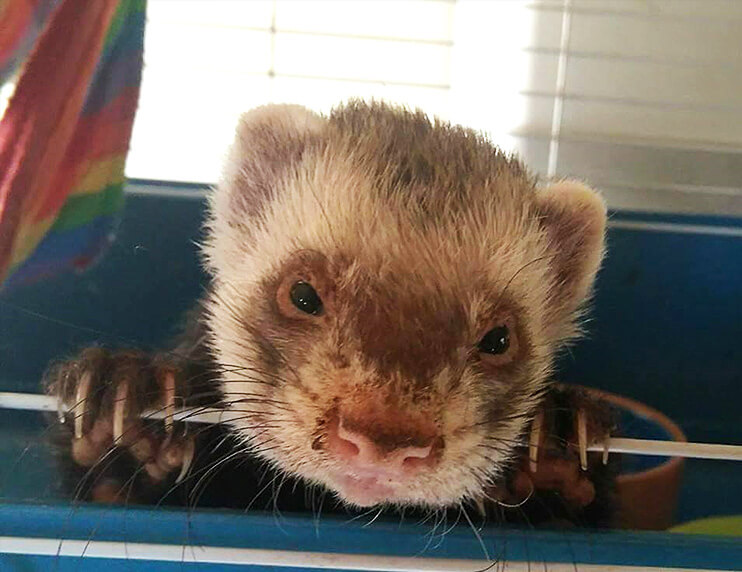 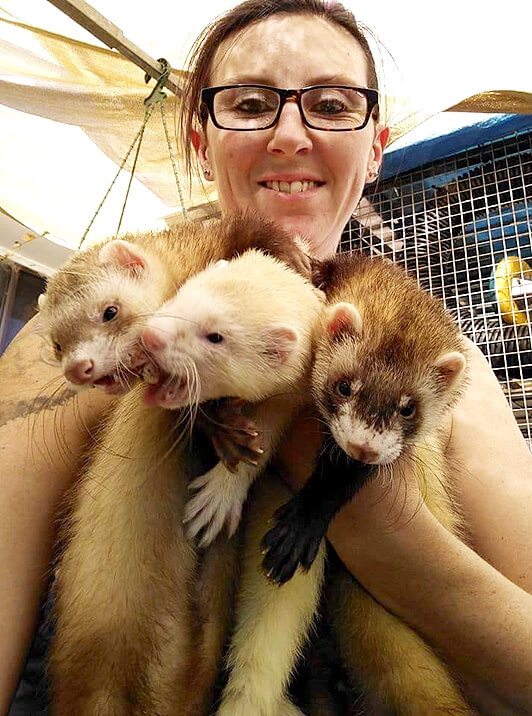 Tell us a little about yourself. How long have you been running a ferret shelter?

I started Unwanted Fuzz Ferret Rescue in September 2013. My best friend Kristy Johnson and I had recently purchased our first ferrets and realised that there were so many people that didn’t know how to properly care for ferrets and many were becoming unwanted. Our aim is to not only take in ferrets, but to help educate the public and provide support to all fuzzy owners.

What is the best thing about running a shelter? What is the most challenging?

The best thing about running our shelter for me would have to be seeing the difference we make to the lives of our rescues. We have had so many ferrets come through and so many different cases.

The most challenging aspect for all involved at Unwanted Fuzz is not falling in love! We put our heart and soul into all of our ferrets so you can imagine how hard it is to see them go.

Can you tell us about the recent deadly outbreak of distemper that your shelter experienced? 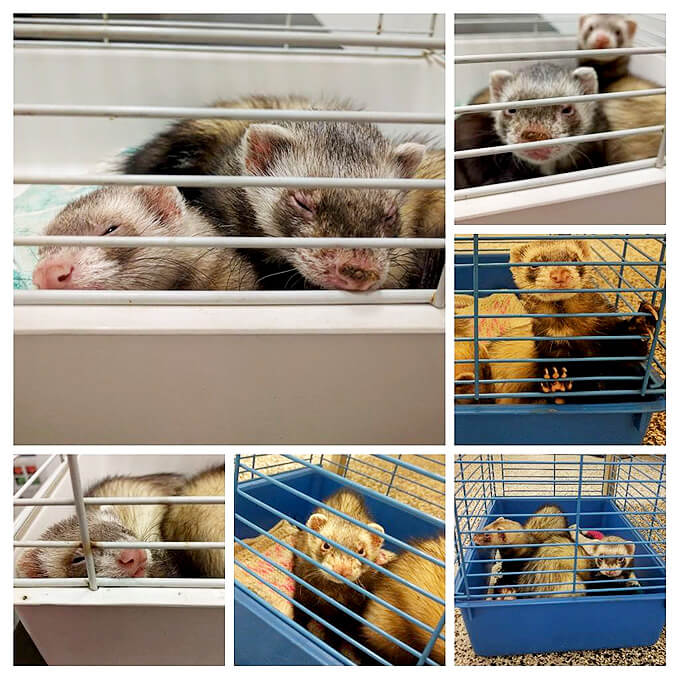 We are not positive how the outbreak happened but are assuming it was brought in by another unwanted ferret. Stacie (the ferret) unexpectedly died about a week or so after arriving in our care. At first, I didn’t think anything suspicious as she had shown no signs of being ill. A few days after Stacie passed, I noticed a few of our other ferrets starting to get a red spotty rash. A vet visit suggested a cellulitis type of rash but with more and more ferrets getting the rash and starting to get flu symptoms, I started questioning the vet and researching their symptoms. When I suggested distemper, the vet agreed that it was likely. We did a nasal swab and the distemper was confirmed.

You only lost two ferrets to the outbreak which is generally unheard of. How did you manage to do this? What is your protocol? How has this outbreak affected the day-to-day running of the shelter?

Everything I read and everyone I spoke to told me how deadly distemper was. Honestly, I was a mess. I was walking around bursting into tears at the drop of a hat, expecting every ferret to be dead when I got up each morning and at that point, there were 61 ferrets in the shelter. I was like this for at least the first week! I hardly slept. But I couldn’t give up on them. That’s what rescue is all about right? Saving the fuzzies! So I syringe fed the 10 sick ferrets with Royal Canin recovery diet and colloidal silver. I also wiped their faces with the colloidal silver. Their eyes and noses had crusted over with snot and gunk, so they couldn’t see well or breathe well. We gave weekly injections of a drug called Convenia and they also had their distemper vaccination and a vitamin A shot.

All of the ferrets here received their vaccinations ASAP once this outbreak hit. While we do vaccinate our ferrets (as well as desexing and microchipping) prior to adoption, we hadn’t vaccinated this lot at the point of the outbreak. Our quarantine methods have certainly changed now. Every new ferret that arrives must be housed indoors away from all other ferrets until they have been vaccinated and their 2-week quarantine period is over. 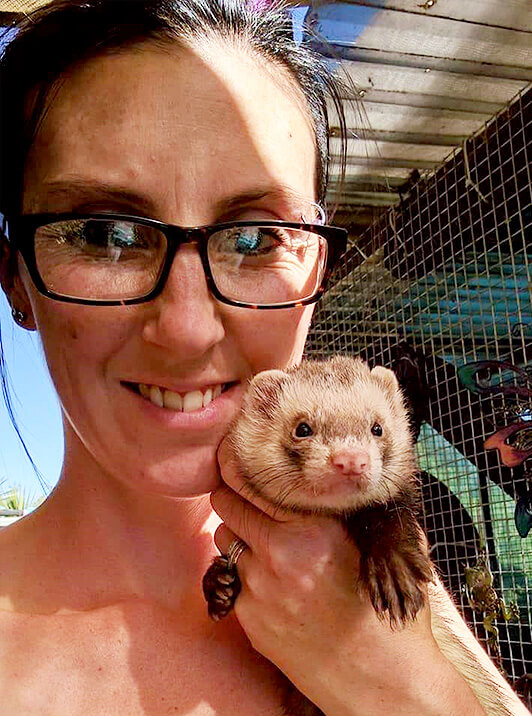 I was speaking to someone recently who mentioned that this year ferret shelters in Australia have seen a record number of ferrets ending up in shelters. Has this been true for you?

We have had quite a few ferrets come into our care but we are pretty busy all year round and have been since we opened.

What do you think is driving this?

Ferrets are very misunderstood creatures and they aren’t for everyone. We have ferrets surrendered due to loss of interest, housing or family conditions changed, nipping or biting. We have even had ill ferrets surrendered as their owners cannot afford to vet work them. 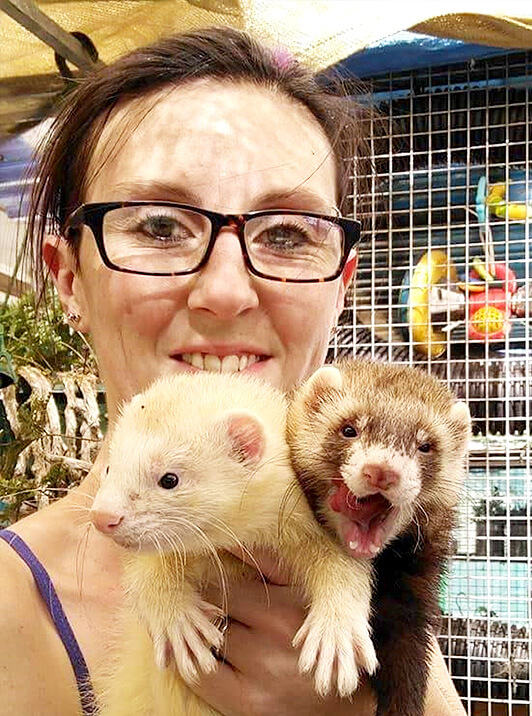