Seth Pywell: The Ferret Whisperer Imagine taking your ferret for a walk, without a leash or fear that she’ll run away 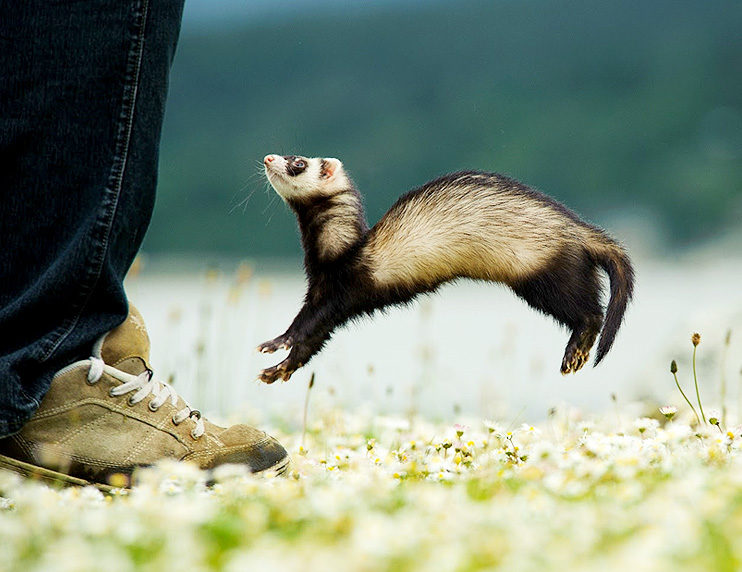 At first, I didn’t quite believe it when Seth Pywell told me about how he trains ferrets to go for walks without leads. I know ferrets I know ferrets are smart and trainable, even more than most ferret owners believe, but can they really be trained to follow you without a lead? My curiosity was piqued and I had to get in touch with Seth to find out more. His experience and passion have me excited about the possibilities for ferret owners. Seth believes that ferrets are much smarter than anyone gives them credit for. Mark my words: you will never look at your ferrets the same way again.

How long have you been an animal trainer? Why did you decide to train ferrets?

I have been training animals professionally for just over 16 years. I own a dog training business called Perth Dog Trainers, where I train private clients and consult with film producers. I am predominantly a dog trainer, specialising in obedience, behaviour modification, scent detection, and protection training. I have also trained goats, cats, rabbits, ferrets, rats, mice, birds, and fish.

When I was a young conscientious ferret owner, I lost a ferret. In fact it was this loss that inspired me to learn more about them. I spent countless hours observing ferrets and watching wild polecat documentaries. One thing that struck me, was how the young kits would reliably follow their mother in the wilderness.

At first this perplexed me; how can a polecat single-handedly control up to a dozen wild kits? Now that I understand how she does this and how we can duplicate her method, I’m very passionate about sharing that knowledge. The enjoyment a ferret experiences while off-leash, exploring the creeks and countryside cannot be overstated.

How many ferrets have you now successfully trained via your method?

That’s a tricky question to answer accurately. Firstly, all ferrets can be trained. I am not a special person and my ferrets are not unique. This training is achievable by anyone with any ferret. The only prerequisite to achieving these results is humility, empathy, and understanding. I have been constantly improving the training system to make it quicker, easier, and more reliable. In total, I have trained some 12 ferrets of my own, although the training program has been constantly improving over this time. I am now very happy with the F3 training system.

Why do you call your method the F3 training system?

The label F3 was chosen to distinguish my training system from others. While many people can successfully ‘trick train’ their ferrets in a neutral home environment, such training invariably fails once outside, under the pressure of environmental distractions. The F stands for “ferret,” and 3 stands for the ferret’s three categories of mustelid priority and the three stages of training.

How is your system different from other ferret training methods? Why do you believe it is more successful?

The most remarkable discovery I have encountered as a ferret owner is that supposed “experts” actually know very little about ferret behaviour. Most ferret owners genuinely believe that their ferret’s determination to get away from them when released outdoors is due to the ferret’s curiosity and independence. The secret to ferret training is to understand what really motivates them. There are three broad categories that ferrets use to prioritise absolutely everything in their lives: Safety, comfort, and acquisitions.

Rather than curiosity, ferrets who run from their owners when outside are simply trying to fulfil their first priority: Safety. Most ferrets run away when released outdoors because they are simply afraid. They are trying to protect themselves. For example, after a morning bush-walk, I was carrying my exhausted ferret the last few meters to my car when an airplane flew directly overhead. This panicked my ferret, and although he totally trusts me, his survival instinct told him to run. He began desperately struggling to get away. A novice mistake would be to restrain the fearful ferret and possibly get bitten. Instead I quickly dropped him into some dense bushes and he immediately vanished from sight, hiding silently. After the plane had flown over, he calmed down. He peeked out of the bushes to check all was safe, then came straight over and climbed up my leg. By allowing and aiding my ferret’s instinct to hide during his times of panic, I proved that he can trust me in life or death situations. I’m saying run, hide, save yourself, just like his mother would do. I only call him out from his hiding place when the perceived danger has passed and his equilibrium (feeling of safety) has been restored. By doing so I’m proving to him that I’m on his side. When this level of trust is established between the human and the ferret, it’s amazing what can be achieved.

Have you ever lost a ferret? Most ferret owners would be terrified to try this.

Bush-walking with off-leash ferrets is not specifically the goal of this training. It is simply made possible because of the effectiveness of the training system. The only ferret I have ever lost was the first jill who inspired me to develop this training system, to prevent such a loss ever occurring again. I currently live on an unfenced bush block, but I’m not the slightest bit concerned about losing a ferret. A strong bond and trained ferret is better insurance against losing a ferret than the best ferret-proof cage available. One afternoon I was shocked to find that I had left my hobb’s enclosure door wide open all day. I thought to myself, where in the world would my hobb choose to be right now? Considering he was trained to return to his enclosure after each training session, I decided that he would likely have run about exploring, then become tired and returned to his underground sleeping quarters. I knocked on his night quarters door and he appeared straight away. A quick search of his enclosure revealed my cheeky boy had stolen a sock!

How often do you walk your ferrets?

I feel that it is my responsibility as a ferret owner to engage and fulfil my ferrets on a daily basis. While this is not always possible, it should definitely be the norm. Typically, we spend two days a week training and one day each bush-walking, exploring the creek, playing games, and hunting.

What would you say to people who would like to train their ferrets?

There is a saying: “He who says he can, and he who says he cannot are both generally right.” So the first thing to do is believe. If you want to achieve something with your ferret, you will. I’ve had countless breeders, society members, veterinarians, and owners tell me that what I claim to achieve is impossible. When confronted with live demonstrations or video footage, they make excuses about why it’s impossible for their ferrets. The truth is, these people don’t believe in themselves, and worse yet, they don’t believe in their ferrets. If we would only take the time to see the world from our ferret’s perspective, things will begin to make a whole lot more sense. Ferrets will do absolutely anything for their owners; their owners just need to learn how to ask.

Do you feel that ferret people often underestimate how intelligent and trainable ferrets actually are?

I feel that all people, including myself, underestimate how intelligent ferrets are. Typically, we treat ferrets as simple, yet loveable, curios. The truth is that ferrets are exceptionally intelligent, and mine never cease to prove just how smart they really are. Take the smartest dog you know, multiply its intelligence by five, and you are only just starting to get an idea of an average ferret’s intelligence.

Are ferrets easier or harder to train than dogs?

That’s a great question. The truth is, ferrets learn at a rate five times faster than dogs. As a professional dog trainer, I can attest to this fact. That makes ferrets much easier to train than dogs under most circumstances. However, they are less forgiving of training errors. Considering the typical ferret owner likely makes numerous training errors per day, their mistakes only perpetuate the myth that ferrets are stubborn and hard to train. Ferrets are dead easy to train, provided you have the knowledge and a clear training plan.

What are the biggest mistakes people make in regards to training their ferrets?

The biggest mistake is believing that ferrets are stubborn. If you believe ferrets are stubborn, your perception of ferrets requires serious evaluation. Certainly, we are happy to accept total responsibility for our ferret training achievements. The biggest challenge we face is that we must equally accept total responsibility for our ferret training failures. The ferret’s job is to be a ferret, and they do this perfectly. We must never make excuses or blame the ferret. The age, sex, history of abuse, occupation, diet, colour, eye sight of our ferrets, has absolutely no impact on their ability to learn. The only thing that impacts on the ferret’s ability to learn is ourselves. When a ferret is unwilling to cooperate with their human counterpart, it is always the human that has failed the ferret, and we will all do well to remember this.

Is the training beneficial to ferrets? Do they enjoy it?

Ferrets enjoy their training immensely. Not only does training provide mental stimulation, but it provides them with the opportunity to explore the wilderness with complete freedom. Certainly without training, my ferrets would not enjoy exploring creeks, bushwalking, solving challenges, and exercising their incredible minds.

Can older ferrets be trained too?

Provided the ferrets are in good physical health, all ferrets respond to training equally. The ferret priorities of safety, comfort, and acquisition do not change with age. One of my favourite ferrets was a ferocious 2-year-old jill, that required welding gloves to handle. Within weeks of getting her, she could be handled with bare hands and walked perfectly off-leash.

How does training help the bond between human and ferret?

The human-ferret relationship is very biased in favour of the human. As much as most owners love their ferrets, the fact is, until we can set our ferrets free, they are simply our prisoners, and this saddens me. Earlier I stated that a mother polecat can easily control a dozen wild kits. This is due to the special bond between mother and kit. By replicating this bond, we humans can achieve the same results. When my ferrets are exploring the wilderness and I call them, they choose to stop playing in this exciting natural Disneyland and come straight to me. This is a truly touching experience that is within reach of all ferret owners.

Would you recommend for all ferret owners to train their ferrets?

Certainly, I don’t suggest anyone readers simply start turning their ferrets loose, but I believe that all ferret owners owe it to themselves and their ferrets to explore the option of training and make an informed decision for themselves.