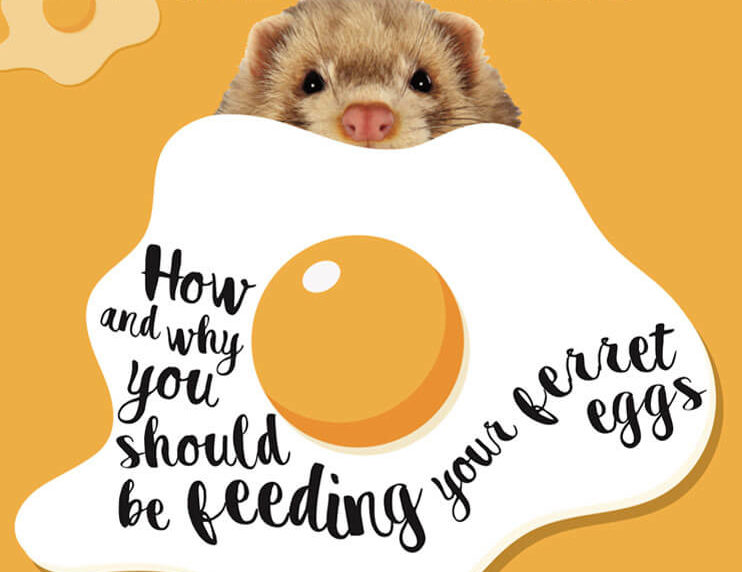 How do you like the newest cover of Dook Dook Ferret Magazine? Is it Eggsellent? Ferretastic? 😉 In this amazing NEW double issue, we cover so much!

How and why you should be feeding your ferrets eggs
How to make DIY ferret toys – How to make a snuffle matt and a 4-tier ball pit maze
What to expect when your ferret gets older
Seth Pywell’s F3 Training System (continued)
Dressing up your ferrets as Zombies for Halloween
Battle Of The Babies: How your fuzzy and non-fuzzy babies compare
How an engineering student gave a ferret a new lease on life
And so much more!

The get this and other issues of Dook Dook Ferret Magazine (6 per year), access to our private Ferret-World Forum, plus so much more, consider joining the Ferret-World Membership.  We would love for you to join the club 🙂

Below is a sneak peek of what is in this big double issue of Dook Dook Ferret Magazine.

How and why you should be feeding your ferrets eggs

Eggs are a very good source of protein, calcium, magnesium, zinc, iron, potassium among many others and also contain various Vitamins, like B12, B6, A, D and E. Giving the eggs raw is a very healthy supplement for many animals. So much so, that it is sometimes a last resort for weak animals and can actually save their life! However, you shouldn’t feed eggs too often as it can cause issues in ferrets. To find out the best way to feed your ferrets eggs and how often you should feed them, join the Ferret-World Membership to receive your copy of this issue of Dook Dook Ferret Magazine! 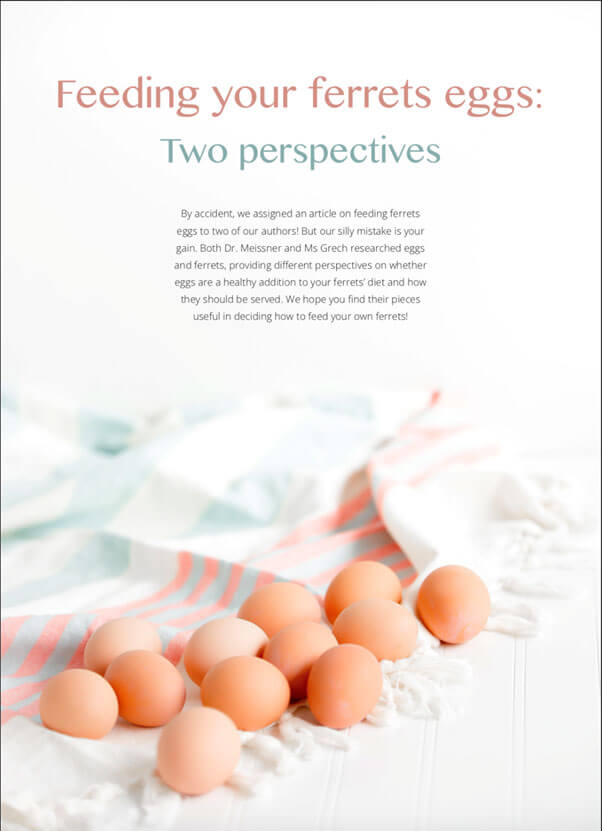 Interested in more from Dook Dook Magazine? Check out more snippets from this issue below and join the club!

Ferret Toys With Bruce! How to make a 4-tier ball pit maze.

Bruce lives in upper east Tennessee, USA with his 7 amazing ferrets, who help him review and create ferret-friendly toys for Dook Dook.
Almost every ferret loves to dig and almost every ferret loves to climb, but I’ve not yet met a ferret that doesn’t love a ball pit! Since ferrets love to explore and love to tunnel, wouldn’t it be great if we could take these ingredients and combine them into one easily made, portable, and easy to clean toy? Get the step by step guide to making this toy! 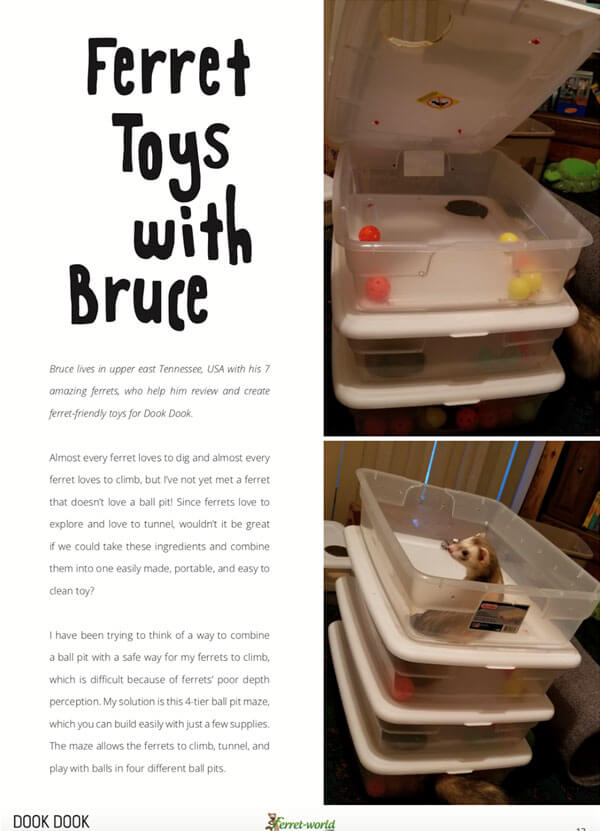 What to expect as your ferret gets older: Caring for your senior ferret

As we get older, our bodies and personalities change along with the passage of time. The same can be said about our amazing ferret friends. It’s documented that ferrets can live up to ten years. In the United States, they typically live for seven to eight years, and are considered to be geriatric at the age of three to four years. In Australia, six years of age is senior status for a ferret. To find out what you can expect when your ferret gets older and read the rest of this article, join the club! 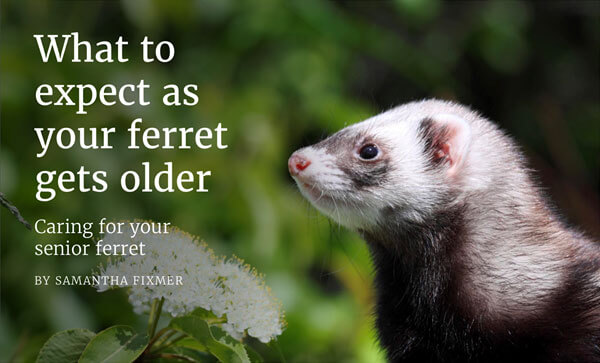 Seth enjoys training both pet and hunting ferrets, but makes very little distinction between the two. While all ferrets have unique temperaments, he says that all ferrets learn by the same laws of animal learning, regardless of their age, sex, or occupation. Seth’s F3 training system is based on those laws, with which he has been able to achieve results that many ferret experts initially believed were impossible. He says, “If someone doubts something is possible, then of course they will never achieve it!”

Seth has written a book about his ferret training system: F3 Training System for Ferret, Mink, and Other Mustelids. He has kindly agreed to share this resource with our readers, so we are publishing a few chapters per issue! Read chapters 24-40 in this issue of the magazine.

How an engineering student gave a ferret a new lease on life.

There is so much to say about Benjamin Campbell, but unfortunately, it seems too few ways to express it. Benjamin is an engineering student; he designs and builds parts and satellites for NASA and SpaceX. Before that, he designed a small device that attaches to a handrail, now used on the International Space Station. In August Campbell, along with twenty-one of his fellow citizens, represented Team USA in the 2019 WorldSkills Competition in Kazan, Russia. The WorldSkills Competition happens every two years, with competitors from seventy-six countries. Campbell placed twenty-third in the world for his field of mechanical engineering. On top of all that, Campbell can add ferret saver to his already impressive resume. (To read the full article join the club and become a Ferret-World Member). 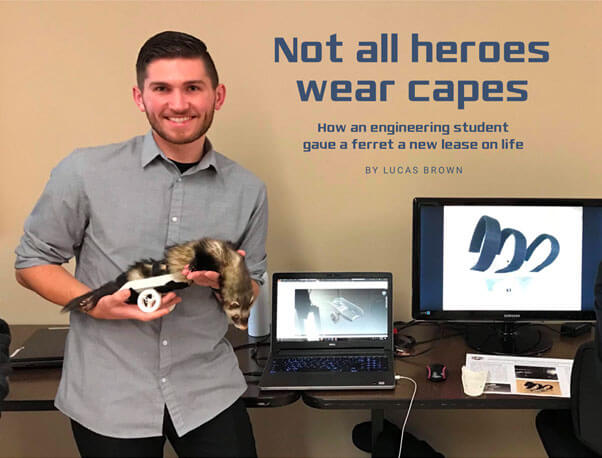