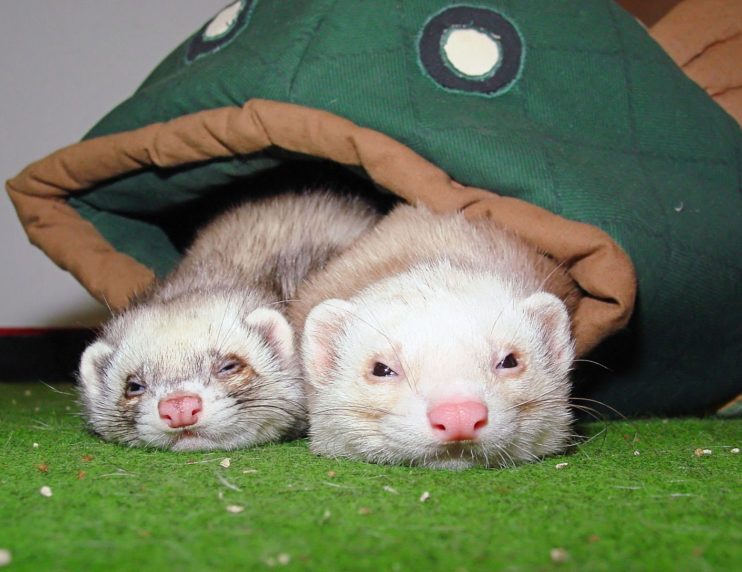 Most new ferret owners spend lots of time mulling over the question, “are ferrets nocturnal?” There isn’t a single answer to this question. Still, getting more familiar with domestic and wild ferrets’ activity patterns can help you understand how your ferret’s sleep schedule may match with yours.

Are Ferrets Nocturnal or Diurnal?

First thing’s first: If you’re trying to decide whether your pet ferret is nocturnal or diurnal, go ahead and throw those concepts out the window right now!

Ferrets do not typically stick to one activity schedule. One of the reasons for this is that ferrets will adapt their waketimes to their owner’s daily routine. Also, a healthy ferret will sleep for an average of 18 hours per day. So, that doesn’t necessarily leave too much time for them to be dedicated specifically to the day or night.

Normally, you can’t quite fit a ferret into one specific category: either nocturnal (active during nighttime) or diurnal (active during the day). They can switch between different schedules according to their and their owner’s needs and preferences.

Further, the distinctions may even persist between individual ferrets in the same household, especially if they are mixed sexes.

Are Ferrets More Active at Night?

The average ferret owner doesn’t pay too much attention to when their ferret is most naturally active. This isn’t necessarily a bad thing, as most ferrets will adapt their sleeping habits according to their owner’s schedule (as mentioned above). They’re generally happy to play with you (almost) whenever you’re available.

For instance, most pet owners tend to work around their work and school schedules to find opportunities to spend quality time with their ferret. So, whether their ferret is active at night or during the day depends on their specific schedule.

Do you work the night shift? Then your ferret is most likely to stick to its natural behaviors, where it can be active during the dawn and dusk (making it “crepuscular.”) However if you work a regular 9-5, your ferret can either be nocturnal or crepuscular, depending on when you decide to set a few hours aside for playtime.

The primary thing you need to be concerned with when determining whether your ferret is nocturnal, diurnal, or crepuscular is that you’re giving them the recommended amount of playtime: at least 4 hours daily.

Are Ferrets Loud at Night?

Whether your ferret is loud at night depends on the type of toys you’ve given them to entertain themselves. For instance, if you’ve given them bells or squeaky toys, then you can expect your little ferret to make all kinds of noise.

However, when left to their own devices, you should only expect your ferret to be noisy if any of the following issues are going on:

Other than that, if your ferret has successfully adapted to your schedule, then you shouldn’t expect too much trouble during bedtime.

Draping a blanket or a specially-designed ferret cage cover over your pet’s cage while they sleep can help tremendously in their ability to sleep peacefully and quietly, whether it’s daytime or night. Just ensure that the blanket allows proper ventilation so your little baby ferrets doesn’t get too stuffy in there!

Can Ferrets See in the Dark?

Ferrets can see in darker conditions than humans can; that much is true. Scientists report that their eyes are at their peak performance during twilight hours (just before sunrise and immediately following sunset). However, this isn’t necessarily “dark,” as the environment is partially lit by gentle sunlight. So, technically, twilight is neither “light” nor “dark.”

When looking at your ferret during the night, you’ll see that their eyes reflect light back to you, just as a dog’s or cat’s would. This is because of the part of their eye known as the “tapetum lucidum.”

This part of the eye helps your ferret to see much better during the nighttime. How? First, the light (however, little of it is available in the environment) lands on the eye’s photoreceptor. Then, the tapetum lucidum essentially reflects that light outward, allowing the eyes to absorb the pigments for a second time.

Thanks to this body part, your ferret will be able to see much better than you can during the nighttime. So, whether your little one chooses to be active during the dawn, dusk, or night, they’ll likely have a much sharper eye than you.

(Do keep in mind that ferrets are sensitive to bright light. So, when they are active during the day, keep the bright, flashy lights to a minimum, as this might do more harm than good for your time together.)

Technically, there is no such thing as a “wild ferret.” The pet ferrets we have today were domesticated approximately 2,500 years ago, as descendants from the European polecat and similar species belonging to the Mustelidae family (which includes stoats and ermines, along with polecats).

However, there is a feral population of ferrets in New Zealand that are considered to be wild.

Since their introduction in the 1880s (to reduce out-of-control rabbit populations), government officials have struggled to handle the wildly breeding ferrets that have now contributed to the decline of native species like the kiwi, weka, and blue duck.

In this case, yes: these “wild” ferrets are nocturnal.

Still, when most people refer to a “wild” ferret, they’re most likely referring to their wild cousins that were never domesticated. So, to answer this question more accurately, let’s break down the species and discuss their time-dependent behaviors accordingly.

First, understand that nocturnal and diurnal are not the only categories these critters can fall into in terms of their daily activity schedules. For instance, a Mustelid (a member of the Mustelidae family) can be crepuscular as well, meaning they are most active at dawn and dusk.

With this in mind, the ferret’s wild cousins follow the activity cycles described below.

The Crepuscular (and Nocturnal) Black-Footed Ferret

These little trouble-makers are considered both crepuscular and nocturnal. How do they fall under both categories? Their behavior changes according to environmental conditions that change season-to-season.

For example, throughout the autumn and spring, ferrets spend several hours of the day sunbathing near their burrows. Other times, though, they’ll be more careful and move about their habitat under cover of darkness.

Many researchers consider ferrets to be “predominantly nocturnal.” However, studies have shown that, no matter how much they stick to the nighttime activity schedule, both black-footed ferrets and polecats are quite flexible regarding mealtime. You can find them hunting in both day and night.

Siberian Polecat: No Preference for Day or Night

Contrary to black-footed ferrets, these polecats are not restricted to a specific part of the day to get themselves up and running. Instead, scientists have seen these ferrets running about during both day and night hours.

However, you’re most likely to see them moving between foraging and home locations during nights with bright moonlight. The bright light offers the greatest visibility, which can help the polecats stay out of harm’s way (and away from predators like large, predatory birds, red foxes, and coyotes!).

Interestingly, the European polecat (another “wild” version of the ferret, the species that most believe the animal was domesticated from) behaves quite differently than its Mustelid relatives in terms of high activity times.

It turns out that males and females have different preferences for the times of the day or night in which they choose to be productive and mobile. On the one hand, males preferred to be up and at it between the hours of 20:00-6:00, showing a clear preference for both nocturnal and crepuscular patterns.

On the other hand, females were more interested in being active during the daytime while also sharing in some of the boys’ crepuscular patterns. Still, they weren’t devoted to these time slots.

The researchers noted that the female ferrets were much more flexible in their day-to-day activity periods than the males, so it’s possible to see them running around whenever they felt like it!

What does this mean for your ferret? Well, since most people agree that they’re descended from European polecats, there’s a chance that you’ll see different behavioral patterns between male ferrets and female ferrets.

Keep a log of when they’re most willing to play with you and frolic about the house, and you may just find similar results as the researchers!

Wrap-Up: Get Used to Your Ferret’s Activity Patterns

Domestic ferrets and their wild cousins differ widely in their sleep and activity patterns.

Thankfully, you don’t have to worry too much about whether you and your ferret will align in terms of waketimes and slumber. With enough quality time, you’ll both learn to adapt to one another’s preferences.

Still, it does help to know the ferret’s background and what factors may contribute to its preferred times of high activity. With this guide, you can begin planning when you and your baby ferrets will spend time with one another while still respecting your natural circadian rhythms.