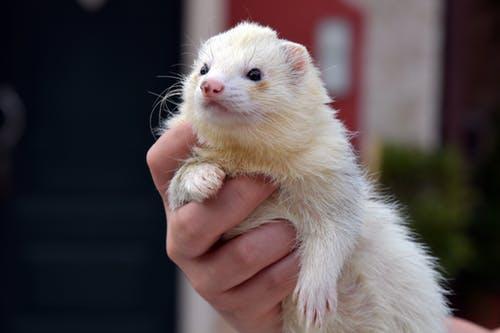 No matter the type of ferret you have, from albino to sable to cinnamon, you can bet that your little buddy will shed throughout the year. However, they won’t always shed in the same capacity, and at times, hair loss may be a sign of poor health.

To learn more about what to expect with ferrets’ shedding, check out the guide below.

Should You Expect Your Ferret to Shed?

It is normal for your ferret to shed (also referred to as “molting”), so there is no reason to be alarmed by moderate hair loss during specific seasons or even during certain periods of your ferret’s life. Just like nearly all mammals, ferrets naturally shed in response to their external environment or even their own bodies.

Some things that may trigger your ferret to start shedding include:

Still, although you can safely assume that your ferret will shed – no matter what kind you get – you can’t expect them all to shed in the same capacity. Some ferret may lose more fur than others; so it’s best to be prepared for all possibilities before bringing a brand-new ferret baby into your home.

How Much Do Ferrets Shed?

The amount of hair that you can expect your ferret to lose will change according to the time of year, their current life stage, and even the room’s lighting. On average, scientists found that the intensity and pattern of hair shedding heavily depended on the season.

For example, young ferrets shed more between August and November. Even then, the amount of hair they lost and the time it took to get rid of it all depended on the specific types of hair they were molting (“guard hairs,” the top fur layer, or “underfur,” the second, lower layer of fur).

On the other hand, adults’ shedding started and ended a bit earlier, and they lost more guard hair than underfur.

Another study showed that day length also has a direct influence on how much ferrets shed. Shorter days normally cause much more hair loss, as the ferret’s body is signaled to grow a new, thicker coat, thanks to the reduced light.

However, this process is delayed by several months to ensure that the newer, lighter coat is ready by summertime. (So, no – you should not be seeing your ferret shedding hair in winter!)

With this in mind, understand that your ferret won’t be able to stick to one type of shedding their entire lives. As ferrets’ environment changes and they grow older, their body’s processes will alter, too, which can result in more or less hair loss as they age.

How Long Do Ferrets Shed For?

Usually, ferrets shed between 6-8 weeks. According to one of the studies mentioned earlier, young ferrets are typically known to shed around August-November, while older ones will start getting rid of the excess fur in June, ending in October.

Note that this is only the case for those living in the Northern Hemisphere. Ferret owners in the Southern Hemisphere can expect quite the opposite, with shedding occurring approximately from January to April for young’ns, and around December-May for older ferrets.

However, no matter where you are, do understand that these shedding periods are only those that are significant enough that they stand out from the rest of the year. Realistically, your ferret is losing hair year-round (except for when they’re saving up fur for the chilly winter season), there is just normally so little that you hardly even notice.

Ferrets shedding habits will change according to seasons. Just as their fur growth patterns change between spring, summer, autumn, and winter, the shedding will do the same. The shedding cycles can be boiled down to two main time periods:

Please note that if your ferret is on any medications, this can throw their shedding cycles off quite significantly. The study referenced above that focused on molting responses to light also showed that ferrets treated with melatonin experienced hair-loss phases that were as much as six months out of whack.

Do Ferrets Shed a Lot?

Ferrets don’t always shed a lot, but they are certainly capable of losing large amounts of fur in a relatively short period. For instance, if you are just coming out of wintertime, it is normal for your ferret to start getting rid of a bunch of furs quite quickly.

Plus, the amount of hair that your little one might lose depends on the individual. Some ferrets naturally have more fur than others, and so will lose more when the season comes around. Others will pack on more fur during the cold months, and because of this, will lose more once spring- or summertime hits.

Still, regardless of what kind of ferret you have, it’s safe to say that their shedding is not as intense as other pets such as dogs and cats. Though you’ll still need to groom them regularly, it’s unlikely that you’ll need to vacuum every day to keep up with all the loose pet hair around the house.

When is Shedding Bad for Ferrets?

Your ferret’s shedding habits will naturally fluctuate throughout the year, so most of the time, losing a bit of fur here-and-there is not bad for your little buddy.

However, you shouldn’t normally expect to see a ferret shedding in winter. In fact, you should plan for quite the opposite. By the middle of the cold seasons, your ferret’s coat should be as thick and long as it will naturally grow. This provides your ferret with a natural defense against the chilly elements that come with the environment’s temperature drops.

If your ferret is shedding during this time, this could be a sign that they could be developing health issues, such as:

Some ferrets might also be unlucky enough to get blackheads on their tails. If this happens, the blackhead will prevent hair from growing on that area of the skin and may lead to further hair loss thanks to the build-up of pus and other discharge on the tail.

If you’ve noticed unusually high amounts of hair loss and suspect any of the health conditions discussed here, have your ferret checked out by a vet to make sure you get the problem resolved as soon as possible.

So, do ferrets shed? Yes! Ferrets shed for all sorts of reasons, most of them naturally influenced by weather patterns, light, sex, and nutrition. However, there may be health reasons driving the hair loss patterns your ferret is experiencing, such as adrenal disease, alopecia, and blackheads.

With this guide, you’ll know exactly what to expect for your ferret’s natural (or concerning) hair loss, and when to schedule a vet visit to keep their coat looking beautiful, shiny, and healthy.

The last thing you want is for your little one’s coat to be scraggly and greasy. So, apply this information to your grooming routine to keep their coat in the best possible cuddly condition!